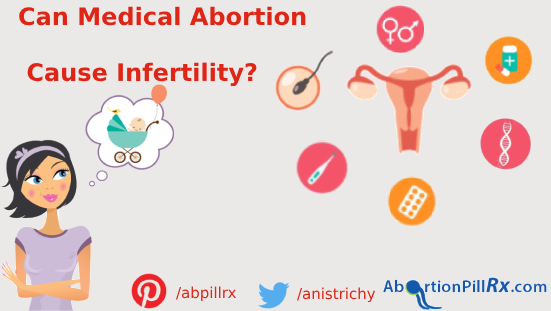 No, medical abortion does not directly cause infertility. No action of the two abortion pills has been reported to have a direct effect on the woman’s ability to be a mom in the future. It is a completely safe and non-invasive method of pregnancy termination for a gestation period of up to 10 weeks. It is highly recommended that you strictly follow the dosage regimen and protocols for use to have a positive experience. You must buy abortion pills from a trusted local/online pharmacy with a prescription or from your healthcare expert directly.

It is also important to know how the pills work so. This will help you understand why medical abortion is not linked to infertility.

Working on the abortion pills

The abortion pill MTP kit (medical termination of pregnancy) contains two chemical abortifacients that act in synergy to bring about an abortion. The first is the Mifepristone drug and the second is Misoprostol. Both the pills work on a hormonal basis. They suppress the actions of the regular female hormones temporarily to end a developing pregnancy.

The former works against progesterone which is a hormone that increases and maintains the thickness of the inner uterus wall to nourish the growing embryo and thus sustain the pregnancy. A hampered functioning of it results in the lining being disrupted and the pregnancy contents being separated. The destroyed tissues are not an integral part of the female reproductive system. Their growth is induced by pregnancy. So, it is clear that the actions of Mifepristone are incapable of causing permanent damage to the female body.

The second medical abortion pill, Misoprostol is a prostaglandin analog. It acts on the uterus primed by the former pill to expel the destroyed pregnancy contents. It does so by severing uterine contractions. The drug also acts on the cervix to dilute it so that there increased ease in the expulsion through the vaginal opening. A complete abortion hence results.

All hormones in the body are set back to normal after the active ingredients of the abortion medication are flushed out of the body. So, the regular functioning of the hormonal cycles is not affected either.

One must, however, be informed that there are certain circumstances in which medical abortion is advised against. You must undergo a complete checkup to identify those conditions if present and only then take up an abortion.

Is medical abortion for me?

Medical abortion is not recommended in the following situations

This may not be a complete list. It is always wise to consult a medical practitioner before making an abortion decision. A failure in obeying the precautions may result in an infection or complication that can then have an impact on your fertility. You must also ensure that you consume both the pills in the regimen in the specified amount and within their respective timings to have a positive abortion experience. 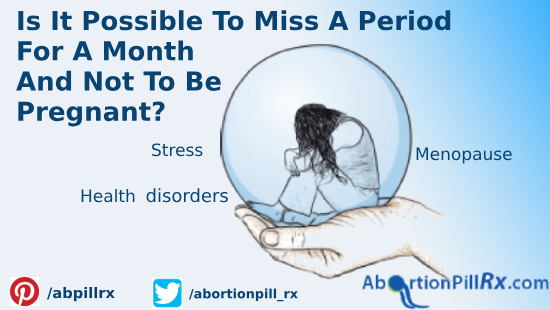 A woman’s menstrual cycle can speak a lot about the changes that her body undergoes. The menstrual cycle has a complex regulatory system. Multiple hormones act in harmony for the effective functioning of the menstrual cycle and hence the reproductive system. In each cycle, the woman’s body prepares for a possible pregnancy. And, regular menstrual periods are a result of the expulsion of the ovum and thickened uterus lining from a failed conception. So, when a period is missed, especially in sexually active women, it becomes a source of excessive mental stress.

However, one must be informed that pregnancy might not be the only reason for delayed menstrual periods. In fact, for a few months after menarche, missed periods for even a few months in a row are noted to be common. There may be many other reasons why periods may be delayed in rather sexually mature women.

Stress is a factor that is capable of disturbing a number of physiological processes. This includes a women’s period. It is a natural feedback mechanism. Stress-triggered hormones signal to the body that it is not yet ready for pregnancy. Raised cortisol levels from mental tension lead to altered sugar levels in the body that further suppress ovulation.

This is known to be one of the most common reasons for the condition in the discussion. This may have a very adverse mental effect on women who frequently indulge in sexual intercourse because stress caused by delayed periods will only delay them further!

An extensive workout routine also begins a similar hormonal cascade being a form of physical stress. So, if you have recently started exercising or now cycle to work, you can expect a late period.

A delayed period usually indicates a reproductive tract disorder although a number of health issues like diabetes, thyroid and a number of cardiac diseases can also have an impact on the cycle. This means that your periods also indicate good health. Every disease that is capable of bringing about a hormonal fluctuation may have an influence on the menstrual cycle. It is wise to visit a doctor before these diseases progress into more advanced stages.

Synthetic forms of various female hormones consumed to keep various bodily disorders under control are known to have an effect on the periods. These may not necessarily cause a delayed period. For instance, after a birth control pill, you do not have the regular periods at all and you just see withdrawal bleeding which is rather regular. But some hormone-based drugs do postpone them.

Towards the end of her fertile period, every woman undergoes hormonal changes that affect her periods directly. In the peri-menopause phase of during an early menopause, women may experience irregular periods some of which may be late by a few months. In the case of a complete menopause, a woman does not get her periods anymore. This is considered to be the situation when there are no periods for 12 consecutive months

Although in the aforementioned situations, a period may be delayed by a month or even more, it is always advised to get a pregnancy test done (even if you practice the withdrawal methods or use contraception). This is because, if the unplanned conception is detected early, there are fewer measured risks in the pregnancy termination procedure. Get the facts of the pregnancy termination before implementing the process of it.