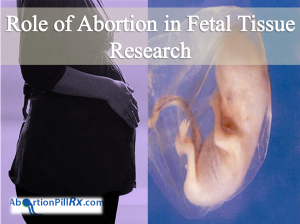 The use of fetal tissue from aborted babies has sparked controversies in the United States, where the Planned Parenthood was at stake of losing federal function. Though the organization was accused for using illegal ways of harvesting or selling these parts, there is a larger picture to the whole matter, and that is- how important is fetal tissue research? It is vital at least for the study of genetic disorder, development, HIV, mutations and a lot more. Those who do medical procedure of MTP Kit abortion can donate the fetal parts if they wish- and that is the rule- donate with consent and do not sell.

Studies are ongoing on hepatitis B and C, liver and immune functions, along with stem cells using the tissues from fetuses. By performing the experiments, scientists aim at finding answers to chronic health conditions. Though not an easy choice, biomedical researchers depend on such parts to save human lives. Be it from miscarriage or induced pregnancy termination, donation of tissues from the aborted individual does help in medical study. Now females who get surgical termination may not be always aware how the fetus is treated.

Women’s Health Center Gets Involved in a Murky Scam

This is where Planned Parenthood was criticized for selling the parts without taking consent of the patients, and making millions out of the illegal trade. The activists produced video footage as proof. However, the organization denied authenticity of the tapes. Women can give the fetus parts herself if she decides to buy MTP kit medicines as well. But, if the same is removed by invasive procedure, and the woman does not state her wish how the fetus must be handled, there could be a scope that the same is mistreated.

However, it is difficult to spot the conception parts when it is too early in pregnancy, nonetheless any donation towards medical observations are critical than flushing down the tissues into nothingness, which does no good to anyone. No one knows if the claims that the videos are real must be believed or not, but it did really shake up the United States. Taking permission from the woman who has got her pregnancy removed is something the centers that deal in supplying placental and fetus tissue, must never be avoided.

The move by the organization allowed anti-abortionists to exploit the situation and drive against women who seek pregnancy termination. However, the issue was different, what came to ensue is negative for reproductive healthcare all together, and women began to order MTP Kit online than getting the services or medications from clinic. It is known that internet pharmacies often sell the medicines at cheaper cost than clinics, as they get the products to be dispensed only on prescription, from real manufacturers.

While Planned Parenthood is women’s health provider (non-profit), receiving fund from the government, it indulges in contraception and cancer screening as well, aiming to meet needs of poor women. It contributes to three percent of all the services out of 700 clinics, while only a handful of centers provide fetal tissue for research. However, the scam (be it true or not) lead to death of three people from the Colorado clinic where a person shot over report ‘no more baby parts’.